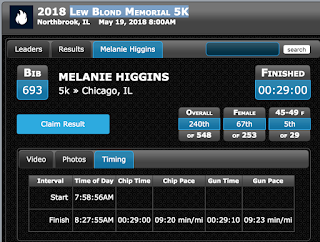 I wasn’t planning on running a 5k on Saturday. After Big Sur, my plan has been to relax, do some speed work and keep my base before Chicago Marathon training starts. But J asked me to run it with her, and it’s a CARA circuit race, so even though it was out in some suburb that I can never remember the name of (I looked it up. It was Northbrook), I signed up on Thursday.

The Lew Blond Memorial 5k is held to honor Lew Blond, a Maple School teacher who passed away from ALS in 2000, and is in its 17th year, but I’ve never seen it on the CARA circuit before. Normally before a race I haven’t done, I would check the website to see previous results in my age group to see what my chances of placing might be. Smaller races = better chances. But it didn’t really occur to me to do that, and it’s been so long since I’ve run a 5k, I knew I wasn’t in PR shape.

J picked me up on Saturday morning,  and we watched Harry and Meghan take their vows before we drove to Northbrook. We parked across the street from the grade school where the race was held and went into the school to pick up our packets. Because the race is in honor of a former teacher, there were signs all over the school that students made thanking and encouraging the runners.

After stashing our packets in the car, we jogged back across the street, around the school to the start line as a warm-up. It was chilly on Saturday morning so I wore my long sleeve Big Sur shirt over a Big Sur tank (Big Sur all the way!). But by the time we got to the start line, both J and I were warmer than we thought we’d be and there wasn’t time to get back to the car. So we did what any other runner would do, we took them off, stashed them on the ground by a curb out of the way, told them we’d be back (in case they thought we were abandoning them) and hoped no one decided that they could use an extra couple of long-sleeve running shirts.

There were lots of kids from the school running the race, and they made them line up behind the rest of the runners. After joking to J that it didn’t really make sense to have all the kids behind me because they were just going to pass me, we were off after a quick air horn blast.

J is still on the road to recovery, and I ran with her last week where we averaged 9:30s so I planned to stay with her. After getting around a few of the kids who didn’t listen about the getting to the back thing, I started concentrating on my breathing and my turnover, trying not to take too big of strides. I stayed with J for most of the first mile before easing off a bit. Mile 1 - 8:45

I doubted I could keep up that pace for long, so I let J go and slowed down to a more comfortable 9:30 pace. I’m trying to deal with the discomfort that comes with racing and not just give up, so I kept repeating “I will do this, I can do this” over and over. As the course wound through the subdivision, I focused on trying to take the tangents - which occupied a lot of my time since suburban streets can’t ever be built on a grid. Mile 2 - 9:28

The last mile I told myself what I always tell myself: there is only 1 mile left and it’s not even going to take you 10 minutes (even though it was a little over 10 minutes what with the extra .1, but I didn’t need to know that). At this point, I felt like every person was passing me, and every time I slowed down even a little bit I reminded myself how annoyed I was going to be if I missed placing by a few seconds. The finish line was on the other side of the school from where we started, and we had to pass the start line to get there. I knew it wasn’t the finish line, but the three high school boys who went tearing past me thinking they were sprinting each other didn’t seem to until after they passed it. It was a good diversion for that last little bit of the race, and laughing about it got me to the actual finish. Mile 3 - 9:28

So I know what you’re thinking … did she place or not? Well, no - but I finished 5th in my age group, which is a whole lot better than I thought I would do. 29:00 isn’t anywhere near my 5k PR, but then again, even if I had run my PR, I would have only placed 4th. The third-place finisher was still 2 minutes faster than my PR. The fourth-place runner finished 40 seconds in front of me - so had I not slowed down maybe I would have beat her. As it is, I’m glad I have a good baseline to judge how well my speed training is going. Now I just have to find a 5k to run later on in the summer.

After the race, we headed inside to the gym, found the CARA tent and tried out their amazing leg puffy recovery things (aka air compression boots). Eventually, we remembered we left our shirts by the curb, so J ran out to get them and another runner asked me about Big Sur when she saw me putting it on. I told her how much fun it was and that she should definitely do it someday. And with that, we headed back into the city where the streets (for the most part) meet at right angles and go in straight lines.

I knew it wasn’t the finish line, but the three high school boys who went tearing past me thinking they were sprinting each other didn’t seem to until after they passed it. It was a good diversion for that last little bit of the race, and laughing about it got me to the actual finish. Mile 3 - 9:28