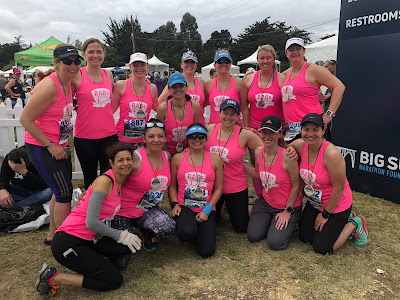 Going away for a marathon with 13 other women takes a lot of planning. There were flights to make, cars to rent, houses to find and excursions to book.

The first full day we toured around San Francisco. Some visited Alcatraz, and some went off by themselves. A few of us had breakfast at Dottie's, then drove over to Haight Ashbury for a little shopping and walking around before meeting everyone over at Fisherman's Wharf for lunch. Afterward, we split up again, several of us taking in the Golden Gate Bridge before ending our day heading south down the Pacific Coast Highway to Pacific Grove where we stayed for the next three nights.


Day two saw most of us going to Monterey Bay Aquarium and walking around Cannery Row. Then we all went to the race expo to pick up our packets. Packet pick up was easy, and the expo was fairly typical. Not huge like Chicago, but they had some nice t-shirts, and I also got myself a mug and a Boston to Big Sur magnet. Yes, I realize the magnet is supposed to be for people who ran both Boston and Big Sur, but I figured since Mr. H. ran Boston and I ran Big Sur, together we rated a magnet. I also got a poster with all of the runners' names on it. I wasn't going to get it, especially because unlike Chicago (or Boston) the poster wasn't free. But it had my name on it. And it's just like Mr. H's from Boston with his name on it and that's pretty cool.
That night we had a wonderful pasta dinner and afterward, we were treated to a reading of the creepy tale about the house some of the ladies were staying in (something about a missing fisherman). After dinner, we all went back to our respective houses where we all tried to go to sleep at 8 pm since our morning was going to start somewhere around 2:45 am.

Since Big Sur is a point-to-point, it basically means they take you 26-miles away and then you have to run back. And because they take you on the route you run back, and they use the buses for the other races, the marathoners get to get up extra for the hour-long ride to the start.

Once we got to the start line it was the usual waiting around until it's time to get into the corrals. With just a few thousand runners instead of 30 thousand runners, the corrals amounted to the announcer saying: go to the back if you're running between 4:45 and 6:00 hour marathons; go to the middle if you're running between 3 something and 4:50 and go to the front if you're running faster than 3 something. I'm in the 4:45 and 6:00 camp, so we walked up the hill behind the start line and then waited around for the start. Of course, like most other marathons, that meant waiting longer than we really wanted to. Which meant we all needed to pee by the time the race started. Luckily we didn't need to even wait until the first hydration stop since there were porta-potties within about a quarter-mile from the start. But stopping so soon, and for so many of us meant that by the time we were all done we were basically the last people in the race. We had fun being last - but we didn't stay last for too long.

Our plan was to run the first 10 miles until we got to the beginning of the ascent to Hurricane Point. We had a pretty steady pace, around 11-minute miles. My goal going into this marathon was to complete it and to have fun with a bunch of friends. And I knew that without having a whole lot of hill training, which I didn't, there wasn't any way I was going to run all the hills. Once we got to mile 10, we started run/walking. We'd walk up the hills, run down and to the beginning of the next hill. For the two miles leading up to Hurricane Point, we ran about 14-minute miles. Going slower and the fact that it was super pretty helped distract from the crazy hills.

But then the downhills came. We tried to be good and not go too fast down the hills. But we couldn't go too slow because we knew we needed to get to mile 21 before 11:50 am so we would make the course cut off. Luckily we made it there with time to spare and were able to keep up our hill-walking plan as we'd been keeping up a 12 - 13 minute pace. However, the hills past 21 started to get steeper, and the last couple of hills, around miles 22, 23 and 25, meant a lot more walking. Plus, going downhill started to be more painful than going up.

Even though it was a closed course, as we veered away from the coast, many of the residents would come out and cheer. I thought I would miss having loads support the way Chicago does. But since I stayed with friends the entire way, it was a lot easier not having cheering crowds every step of the way. Plus, there is some pretty interesting course support - like a man playing a grand piano once you cross Bixby Bridge at mile 13. Yes, that's a guy with a grand piano at the top of what to Chicago eyes is a mountain - 275 feet above sea level.

Once we crested the last hill around 25.5 it was all downhill - which meant we ran the last mile-ish to the finish. Which sounds great and all - you totally want to run to the finish line - but you get used to run/walking, and then suddenly you're not run walking anymore and all you want to do is take a walk break. I started wishing for a hill to walk up. Apparently, we were all waiting for someone else to suggest a walking break but none of us wanted to be the one to do it. Of course we also all wanted to finish, and so running (albeit slowly) got us there quicker.

When we did finish, my sister was waiting for us and cheering us on. I can say that even though I had a great time, I don't think I ever wanted to finish a marathon more. I didn't run as hard or fast as I have other races, but it was by far the most challenging course I've run. But it was also one of the most fun races I've done because I stayed with friends the entire time and the scenery was so beautiful. But, as much fun as it was, next time I visit the West coast I won't be running a marathon.