Tiny Toy Knits for Christmas (aka using my Stash) 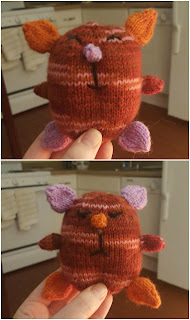 The last few weeks I have been knitting toys and tiny items for Christmas. My sister so graciously loaned me several of her toy knitting books and I picked one and started knitting from the beginning. First with Happy Cat/Sad Cat, and then the Egg/Penguin. then the Egg/Alligator. (side note: do you know how to tell the difference between an alligator and a crocodile? One says see you later and one says after while.)

I actually started knitting some vegetables first. I started with an eggplant, and then made what I call an "organic" carrot because it certainly doesn't look like the perfect carrot in the book and then a tomato. Originally I was thinking of giving them to one of the little kids because who doesn't like play food? But now that I've started collecting them in my knit basket on my counter I kinda feel like I want to keep them, because, who doesn't like knit vegetables?

Years ago, when I first started knitting, I knit all the little kids - which at the time consisted of my sister's three children and one child on my husband's side - little bears for the boys and a little rabbit for the girl. They were cute. My niece called hers Cross Cross Bunny because apparently his mouth looks like he's not happy. I like to think of him more as contemplative. So this year I am making toys for the new batch of of little kids.

I like knitting up toys because they are quick and forgiving. And oh so cute. Happy cat/sad cat got awws from pretty much everyone and I kinda feel like I need to knit one for every person I know - or at least every person who could use a happy cat/sad cat which is pretty much everyone. You could carry it around and you could show people the happy side or the sad side depending on how you were feeling. The world would be so much more civilized that way I think.

The other bonus about knitting toys is that they help you use up your stash yarn. Almost all of my yarn is stash yarn. I have rarely bought things for specific projects. A lot of the yarn I have bought has been for toys, so I guess that makes it project yarn rather than stash. But is there really a difference between project yarn and stash yarn? That yarn I bought at Purl Soho for Mr. H's sweater that I haven't yet knit, or started, or thought about since I bought the yarn several months ago, sure that's yarn for a project, but since it's been sitting in the bins for so long, it's become stash yarn because at some point it all becomes stash. There's a life lesson, or philosophical thought in there somewhere, but I was never very good a philosophy, so don't ask me to figure it out.

I tell myself all the time that I'm not going to buy any more yarn until I've cut down my stash significantly. And the last time I added to my stash, I didn't actually buy anything. One of my sister's friends was giving away yarn that her mother had stashed over her many years of knitting and so I brought home several skeins and half skeins of yarn that a woman who I didn't even know had stashed for so long that she had multiple bins of yarn left over when she died. It was sweet of my sister's friend to offer her mother's stash to her friends, and sisters of friends. It was like going on a bit of an architectural dig to see what kinds of yarns she had and envision what kinds of things she would have made with them. She actually had a project on needles among her stash. Something many knitters can relate to.

She had some wonderfully soft yarns and lots of eyelash yarns. She had skeins enough to make a sweater, and bits and bobs of skeins left over from other projects. I mostly took what I assume is Cascade 220 to go with all my other Cascade 220 (my yarn of choice for knitting toys) and we all promised to make wonderful things that her mother was never able to get around to. The see you later alligator is made of some of her yarn.

As I finished each little toy, I put it on a shelf (or in the basket if it happens to be a vegetable), lined up and ready for Christmas. Sometimes I wonder what happens with the knit items that I send out into the world. Do they hang around forever because someone feels like they can't get rid of them when the hat becomes too small or cross cross bunny's mouth has frayed that now he looks cross and sad? I feel like it should, but it doesn't really matter to me. Because while I loved it while I was knitting it, once it's gone it means less yarn in my stash! And less yarn in my stash means I get to buy more yarn. It's a win win when you think about it.