I'm not entirely sure why they call this the Good Life Race - there must be some story - but it's not on the website.* Anyway, I ran this CARA Circuit race for the 2nd time. And, spoiler, I PR'd.

I thought I might be able to shave a little off my PR since I have been training well and am feeling pretty good. But I wasn't going for a specific time; I just wanted to go out there and have a good time - in both senses of the phrase.

Because I'm a doofus, I didn't sign up for the race in advance. So I went with my sister to packet pick up where I signed myself up for the 5k and the little guy for the 1 mile run. The only issue we had with packet pick up was that the website said it was supposed to be at Lively Athletics, which sister said it was at before, while I maintained that no it was (at least two years ago) at Fleet Feet. Anyway, we get to Lively and yep, the website had it wrong. But no matter, we totally spent time looking at all the cute stuff at Lively and I ended up buying a new version of a bag I used to have but then didn't and it's a really long story, so let's just say if packet pick up was correct on the website I wouldn't have gotten a new bag - which is both good and bad.

On race day, Mr. H. had to work the CARA tent, so we head out early, and get there around 7:30 am. The kid's 1 miler doesn't start until 8:45 so we have plenty of time to hang out, visit the vendors, say hello to the Lively Athletics ladies and let them know how much I love my bag, which I have with me. After 'helping' set up the tent, we head over to the packet pick up area because I noticed that they didn't give me a youth shirt for the little guy, but a small men's shirt. They let me know that they can't switch it out until after the race, which is fair enough, but I had thought they made a mistake when they gave me the larger shirt, but it was really because they weren't sure if they'd have enough kids shirts. In the end it didn't matter since we were able to switch out the shirt and they are super cute and soft and he wore it the rest of the day totally impressing his friends at the birthday parties (yes, more than one) he attended later with tales of his 1 mile run. 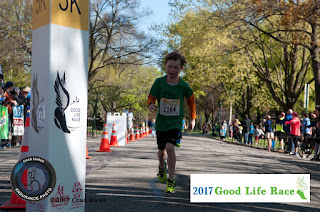 Since the kids mile was first, I ran with S. He ran for about an 8th of a mile before complaining his
back hurt, so we walked. After a minute or so, he decided to run again for a while, and we did this pretty much the entire mile. He didn't complain so much as just not want to run the whole time. Which I totally get because I often want to stop in the middle of my runs no matter how I'm feeling. He finished in slightly over 12 minutes and was X in his age group - 6 and under.

The women's race (they split this race between men and women for some reason) started a few minutes after the kid's race ended, so I was nice and warmed up for my race. I seeded myself with the 9 minute pace and waited for the gun to go off. Which it did without much fanfare and we were off.

My first mile I weaved in and out of people who either weren't running at least a 9 minute mile, and then those who were running a 9-minute mile but since I was running closer to an 8:30, I obviously had to pass. By the end of the first mile I was in a pack of similarly paced women and settled in. First mile: 8:31.

The first time I ran this race two years ago, I had a good first mile, and then a much slower 2nd mile. I tried to remember this as I paced myself to not slow down too much. Most of the 2nd mile is on the same street, so I just concentrated on putting one foot in front of the other, breathing and telling myself to not worry about going a specific pace. After turning west, we head up a slight hill with the water stop at the top. While I didn't 'power' up the incline, I make it to the top, skip the water and look for the couple of turns before we get to head for home. Second mile: 8:47.

The last mile has three turns, which makes it interesting. I try to take the tangents so I'm not wasting steps. My legs and lungs aren't 'screaming' but it's not like they're saying 'wow, this feels great - keep going!' either, and I figure I'm going to reach my limit any minute. But then in my 2nd to last turn I see the pig tails belonging to my niece. I figure it can't actually be her because she usually runs faster than me. But as I ever so slowly gain on her, I realize that nope, it's her. As we round the last corner, about half a mile away from the finish and for one fleeting second I have an image of gathering all my inner strength and whizzing past to the finish line. But of course, her legs aren't hurting anywhere near what mine are, so she see's the finish line and starts to speed up too. Oh well, I didn't really think I could catch an 11-year old. Third mile: 8:40

And then less than a minute later I am crossing the finish line with a new 5k PR of 26:55.5. And I finished in the 9th in my age group! (I just want you to know that I so rarely use exclamation points outside of work because 1. I am forced to use them at work for things that I do not agree need them and 2. Unless I am shouting, do I really need an exclamation point? But, I really do feel like a 9th place age group finish is worth it.)

Up next, the Kentucky Derby Festival miniMarathon. I'm all ready to set a new PR - except maybe not since it's supposed to be 85 degrees and possibly thunderstorming in Louisville on Saturday. So, you know, we'll see.

*Note: I emailed Good Life and their official story is: Years ago the title sponsor was an area hospital and the race was called "the Race That's Good for Life." We shortened it a few years ago to Good Life Race because it was easier to remember.

Congrats on the finish! Good investigative journalism on how "The Good Life Race" got its name!

I ran it when it was The Race That's Good for Life. I prefer that name. But that's just me.