One of the things we're trying to do this year is eat healthier by cutting out as much processed food as possible. This means that we either have to give up, find replacements for or make our own for some of our frequently eaten foods. This last week embarked on making our own waffles and bagels and ice cream.

Now waffles are fairly easy; people make them all the time. The only thing I needed that I didn't already have in my pantry was a waffle iron. I subscribe to the Alton Brown philosophy of kitchen gadgets - I try to not have too many single-purpose items. I occasionally look at the Cuisinart waffle/griddle/panini maker on Amazon as this incorporates my desire for both a waffle iron and a griddle - I have no read need for a panini maker. I will be all ready to buy it and then I read one bad review and I worry that I'm just going to end up hating it and I move it in to my 'keep for later' part of my Amazon cart. Good news is my sister has a waffle iron and so I just borrowed hers.

Frozen waffles are one of the primary breakfast items for the kid and while my homemade ones still have some sugar in them, at least they don't have as much sugar as the store bought ones. I buy blueberry (or blueber as they are called in this house) frozen waffles from Trader Joe's and they already don't have preservatives or artificial colors, so in the grand scheme of things, they aren't terrible. But the homemade ones smelled wonderful and looked great. I even took some frozen blueberries and added them to a couple of waffles so they'd be even more like the store-bought ones. S helped me make them and he seemed pretty excited. Way more excited than I was back in college when I worked in the cafeteria at Augustana and got stuck working the Belgian waffle iron for awhile. I would stand there reading a book waiting for someone to decide that today was the day they wanted a waffle. I didn't have to make the batter. I just had to scoop some on to the waffle iron, let it cook for a minute or two, flip it, let it cook for a couple of more minutes and hand it over. I've got to believe that the waffle iron had some sort of beeping system when it was done otherwise I'm sure I would have been making burnt waffles - of course that would have stopped people from bothering me when I was trying to read.

Luckily, my sister's waffle iron does beep when it's done so I knew when to take them out - no burnt waffles. Unluckily, S decided that he didn't like the blueberry waffle. We gave him a regular one, and he didn't like that one either. We've had this reaction before. We make something from scratch and he decides it's just not as good as the store bought food. But the next day we tried again and this time he ate it, so hopefully that continues because we only have a few left of the Trader Joe's frozen waffles and if he decides he doesn't like homemade waffles (a) we won't be needing to buy a waffle iron when my sister wants hers back and (b) S is going to have to give up waffles for breakfast.

Unfortunately for him, one of his other breakfast staples are bagels. The Trader Joe's raisin & cinnamon bagels have even more sugar in them than the waffles. Mr. H. also eats a bagel each morning, so figuring out an alternative to store bought bagels is important. At first we figured we'd just eliminate bagels all together, it seemed ridiculous to actually try and make bagels. I contemplated finding a bakery that makes their own bagels and grilling them about the ingredients. But then I looked at a couple of bagel recipes and it looked pretty easy. So today we set about making bagels. As the photos show, we did manage to make them, we even made some with raisins and cinnamon. It remains to be seen if S will actually eat the bagels. I do not have high hopes because frankly they look nothing like the bagels he normally eats and if we know anything about the way a child feels about food - it is all about what it looks like - unless it's candy. If it's candy it can be the most disgusting looking candy ever and they'll put it in their mouth. 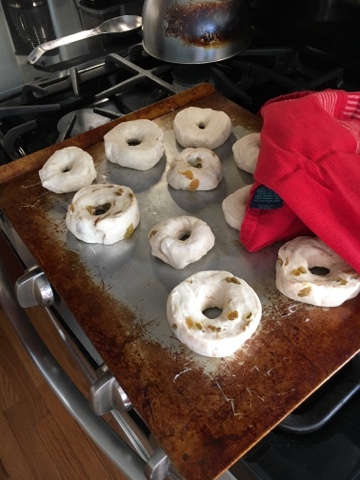 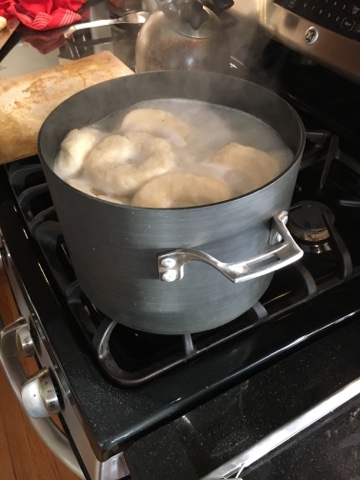 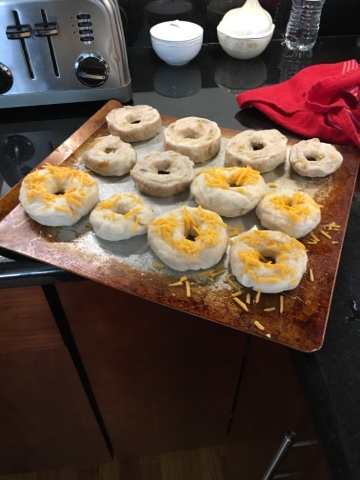 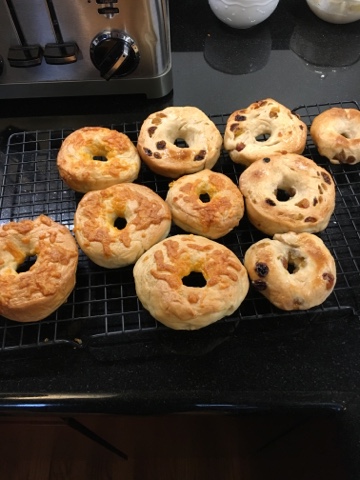 He had no problem eating the homemade ice cream we made however. Yes, I already had an ice cream maker. I know what I said about single-use kitchen gadgets, but this is different. This is for ice cream. Actually, had I had my Kitchen Aid stand mixer when I was buying the ice cream maker, I would have bought the attachment that goes with that rather than a stand alone one. But I didn't, so I broke my (fairly flexible) rule for an ice cream maker because it makes ice cream! Anyway, while I am trying to cut sugar out, I know that I'll want at least some sweet things and I'd rather have the kid eating homemade ice cream rather than crappy candy or other junk for dessert.

Of course, it's not just waffles, bagels and ice cream. We have plans to make pizza from scratch next weekend - including the sauce, as well as making pasta sauce - which I have never done. I don't know  how far we'll take this. Maybe I'll be churning my own butter soon. Of course, I can't have a cow, so I'm going to have to settle for store-bought milk. But I can have chickens....just kidding, that might be a step too far.

Very cool that you are making all of those things from scratch. I have a waffle iron, but haven't used it in sometime as it is less mess making pancakes!