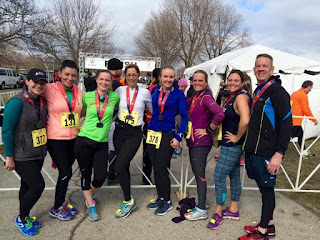 Saturday morning was a fine morning for a run up Cricket Hill, twice. At least that's what we told ourselves. This is my second year running this race and it was as much fun, if not more, than last year. But, this year's race was different in a couple of ways:
I did make a mistake of wearing my jacket on the run, so even though I had a short-sleeved shirt on underneath, I ended up being hot the last few miles. I won't bore you the details of each mile. We kept a pretty steady pace of around 9:45. We had a few faster miles and one 10 min. slow mile. Amazingly, even with the hill, my last mile was a 9 - so that makes me feel good. In the end, I ran a 1:37:05, 9:43 pace, which put me in 31/78 in my division; 328/652 women; and 809/1265 overall. Right there in the middle, just where I like to be.

But this means that (a) I should be able to run a 10 minute pace if not faster half marathon - but why can't I seem to do that? And (b) that I really should start doing more weight and speed training. I need a coach - even a virtual coach.

It was a fun race, I saw lots of friends, I earned another medal and shirt and spent a couple of hours outside on Saturday morning. What could be better?

Next up - Shamrock Shuffle (?) Chi-Town Half (?) - Both questions marks because I have signed up for neither.

Congrats on the PR! It was great meeting you. It was perfect PR weather, but 2X Cricket Hill was not very PR friendly! Speed training does go a long way in helping me drop my half marathon times. Also, I like to do a couple of 15 milers in the weeks leading up to a goal half marathon. That way, 13.1 seems short! Congrats again.

It just doesn't seem very sporting that a hill that almost killed you should be named "Cricket Hill." I mean, that sounds so cute and cheerful and all.

Now Velociraptor Hill - There's a hill that sounds like it could do some damage to you!