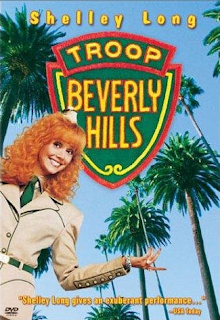 Several weeks ago - months ago now - one of my running buddies loaned me Troop Beverly Hills because at some point during marathon training I mentioned my whole Iconic 80s Movie list and that this was one of the movies on the list I had never seen. Gasps arose from the under 40 crowd as how could I never had seen this movie.

Well I'll tell you. Troop Beverly Hills came out in 1989 - when I was a senior in high school. That same year movies like Sex, Lies and Videotape, Indiana Jones and the Last Crusade, Batman, Dead Poets Society, Ghostbusters II, When Harry Met Sally, Bill & Ted's Excellent Adventure came out and I went to see them (and probably a whole host of others as I actually worked at a movie theater). Much as I loved Shelley Long in Cheers - and longed to have a place where everyone knew my name - I wasn't really about seeing her or a bunch of kids in Troop Beverly Hills.

So yesterday, as I sat and continued to work on the pair of socks that I'm knitting my husband for Christmas (yes, I know it's late, it's almost done) I finally popped this movie in and got to watching.

The first thing I notice is woah - did people really wear huge shoulder pads in the 80s? Was that really a thing? OK, I know it was, but if this movie (and Ruthless People and probably a whole host of other movies) was any indication, the women living in Southern California could double as line backers for the Bears on the weekends - which may be an upgrade to the Bears' current line up amiright? In addition to the crazy outfits sported by Ms. Long, the other stand out thing was how many of the girls in her troop looked vaguely familiar.

After a quick search on IMBD, I find out that yes, that is that kid from Punky Brewster (not Soleil, but Ami). Yep, that's Carla of Watchman fame.  Kellie from Life Goes On (when was the last time you thought about that show, huh?) and another blast from the past, Emily from Small Wonder both have parts. And yes, that's Jenny Lewis who was most recently in A Very Murray Christmas which is why I spent the entire time watching that wondering where I knew her from. It also features a scene with Tori Spelling, who despite her small part, got top billing. Wonder why that was?

So after figuring out why all these kids looked familiar and reading how the majority of them didn't go on to tv and film fame but are now leading basic lives like the rest of us (and maybe because of this everyone seemed to still be alive, not in jail and not a recovering drug or alcohol addict), I settled in to a tale of a shallow woman getting a divorce, has a 'what am I going to do with my life' moment, leads a bunch of girls on a soul searching mission where they figure out that, while they may not be like 'normal' kids, they still are little girls who have feelings and want to better themselves. In the process the parents become a little more involved, bullies (both adult and child) get their comeuppance and everyone lives happily ever after (except for the bullies one presumes).

Not an entirely bad way to spend a vacation day while knitting (and a crazy storm ravaged outside - this is what happens when we have a mild winter - winter comes back and slaps us on the face with little pellets of pain).

So one more off my list. At this rate, I'll only be 50 before I've checked them all off.