80s Movie Marathon - Back to School 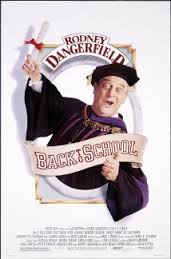 I have wasted a 2-week vacation not watching my 80s movies. To be honest, I almost completely forgot about my little quest to watch these movies. But for some reason, people like to check out my blog and see what 80s movies are considered iconic by Buzz Feed. So I'm about to watch Back to School. I'll keep you updated on my progress over the next 97 minutes.  - 9:35 a.m.

Update 2 (9:50 a.m.): So according to my meager research (Google and Wikipedia) Rodney did not attend college. I did find out that he has a daughter named Melanie, so clearly you don't need a college education to give your daughter a wonderful name.

Update 3 (10 a.m.): Since it's a 80s comedy, it only takes about 15 minutes into the movies before Rodney opens a shower curtain on a woman and we get a flash of boobs. If you're fast forwarding to just the gratuitous breast shots, it's at 15:27.

Update 4 (10:20 a.m.): It's registration time and people are standing in line to sign up for classes. I'm sure kids watching this movie today would have no idea what they are doing. I remember doing this my first couple of years of school. Then we moved on to the oh so advanced method of signing up via phone. Some days I wonder how we lived before the internet.

Update 5 (10:38): Is "Twist and Shout" a requirement 80s movie music scene? What's nice about this movie is the obligatory music scene is followed by the obligatory fight between the bullies and the misfits scene. So you get both of those out of the way in one quick only slightly painful swoop.

Update 6 (10:59): You learn something new everyday: Danny Elfman was in Oingo Boingo and they make an appearance in this movie in a second (but shorter) music scene.

Update 7 (11:20):  Final thoughts on Back to School: Rodney Dangerfield looks a lot younger and in better shape when he's diving. I looked up Kieth Gordon (also in Christine) to see what he's up to these days. It seems he's given up acting for directing and producing. Of course, the break out star of this movie is Robert Downey Jr. This movie was made in 1986, so I'm pretty sure he just brought his wardrobe from Weird Science . I'm so glad the 80s fully committed to their look or we might still be stuck with big hair and shoulder pads.

So another movie off the list. Up next, Teen Witch.

I agree - you don't really need a college degree to give your daughter a wonderful name.