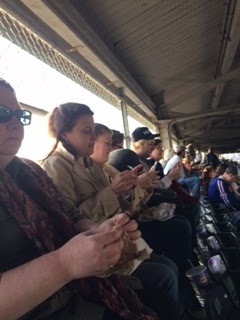 Last night the knitting group went to a Cubs game instead of Kopi. We always talk about having outings and we never quite get around to doing them. I think part of the problem is we always want to find a time that everyone can make it but there is never a time that everyone can make it so we end up doing nothing. This time we picked a couple of dates, voted on which ones we liked the most, and those that wanted to go went.

We got group rate tickets and were way up top along the third base line. At first that didn't seem too bad since we actually had a pretty good view and could even see the lake over the east side of the field. Quick side note, when we got up to our level, we asked an usher for some guidance on our seats. He started to show us, but then turned around and took us to other seats and said we could sit in a section that is normally reserved. It was pretty much behind home plate, though still on the upper level. It was very nice, and when had to tell him we were meeting other people, he said "I only do something nice once a day..." Oh well, he tried.

Despite it being June, it was windy and cold, and there were lots of jokes about us knitting scarves and hats and blankets (some of us were actually knitting those things). Not me, I'm working on a bookmark. But regardless of the cold, it was a lot of fun.

To make it even more exciting, the Stanley Cup was at the game and Toews threw out the first pitch. We actually didn't see that because we met at the bar formerly known as the Ginergerman. But it was still exciting. We left after the 7th inning stretch hoping the Blackhawks would sing - but no luck.

Now maybe we can schedule that retreat we've always talked about.

Stich and pitch looks like a great idea. I did not realize that knitting groups met at baseball games...very cool!