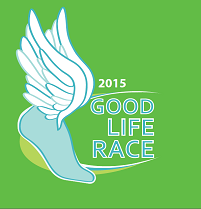 I went back and forth on whether or not I was going to run this race. It's the second race on the CARA Circuit and in Oak Park, so not too far away. On the other hand, I am still training for a half marathon, and it fell on the day after a 10-mile run. I hemmed and hawed so much that I missed on-line registration (and hence the CARA discount) and the kids races were closed. So I decided, nope, wasn't going to run. But then Sister J. decided that we were going to run, and despite the fact that she drove to Oak Park on Friday to sign us up in person but was turned away because they didn't take credit, we made the trip back to Oak Park on Saturday to sign up. Why we torture ourselves like this is beyond me.

With a 9:10 a.m. start, I didn't have to wake up too early to pick up my sister and get out to Oak Park. Because there is no traffic at 7:30 a.m. on a Sunday, we made it there in no time and had about an hour to kill. This was pretty easy because I ran into several people I know including former and current CARA employees and people who live on my block. Because the race starts right by the high school, they had gear check and the sponsor booths inside.

One of the interesting things about this race is they have a separate men's and women's start, with the women starting about 40 minutes before the men. With a smaller field than a co-ed race, sister and I were able to make our way past slower runners after the gun went off without too much effort despite the fact that we started toward the back.

Much like when I ran the Shamrock Shuffle, I told myself I wasn't going to push myself too hard since I had just run 10 miles the day before. My plan was to stay around a 9:30 pace. Apparently this is what I need to tell myself before running a race because my splits were 8:48/9:05/8:54, finishing 27:41:2, 30/92 in my age group, 196/567 overall (women). This isn't a PR for me (if the 27:18 time is to be believed for the Run for Boston), but it feels pretty good to be running a sub 9 pace and not totally dying (though boy it was rough that last 10th of a mile). I'd like to get my 5k under 27 minutes, but of course that would entail me doing some speed work, which doesn't really sound like fun.

A lot of people said how much they really liked this race when I talked about signing up. It is really nice to run some other place than the lake front path, and the course is pretty flat. For some reason, it's a lot of fun running without men, especially when you get a flower at the end of the race. Plus, because the men went off after us, sister and I were able to head to the finish line and watch them come in. I always think it's cool to see the really speedy people finish. In the end, I'm glad I ran this race, even if it meant being pretty tired yesterday.

Next up on the calendar is the Lakefront 10. This is in lieu of our Saturday long run next week for half marathon training. Again, right now my plan is to go out and run a slightly faster training run, but not race - since it's 10 miles it's not like I'll be getting anywhere near 9 minute miles. On the other hand, I could use this as a test to see if I can keep up my goal race pace of 10 minute miles.

Congrats on the finish. Glad to hear you liked this race. I was thinking about doing it. Maybe next year!