Instead of doing a long run on Saturday and then some race on Sunday, I decided to just do a race on Saturday. It made my Sunday a lot less tiring. And, since it was CARA's Lakefront 10 miler, it counted at a long run.

Saturday morning Mr. H. left the house sometime before 5 a.m. to set up down at Montrose. My alarm went off at 6, and as per usual, I laid there an thought about sleeping in. After about 20 minutes, I rolled out of bed and got ready. I am lucky enough to have a mom that lives close to me and who is willing to come by and watch Baby H. while I go run. As sister ran the race also, once mom and sister were at the house, we headed out, Ubered down to Montrose and began our pre-race preparations; basically gear checking, peeing and running into a bunch of people you know from summer marathon training.

I really enjoy going to races and seeing people I know from training. It makes the waiting that much more fun, and you have the possibility of finding someone to run with - as I did this time.

As I said last week, my goal was to keep a 10-minute pace to prove to myself that I can run a half marathon at 10s. I started out with several people from my training group and my sister. While it was crowded at the beginning, it spread out fairly quickly and our group separated. I informed one of my summer/winter/spring training buddies, Jen, that I planned to run 10s and she promised to stay with me as long as she could. Sister and one of the other women sped off, while the others were not far behind.

The first couple of miles came and went quickly. The course headed north on Simonds Dr., turning around Lawrence, making a quick detour over Cricket Hill then heading south on the lakefront path. Before we knew it, 5 miles had come and gone and we were both feeling really good. By the time we turned back north, at about 7 miles, we knew we had this race in the bag (and by 'knew' I mean we started to hope that we weren't going to hit some unseen wall). 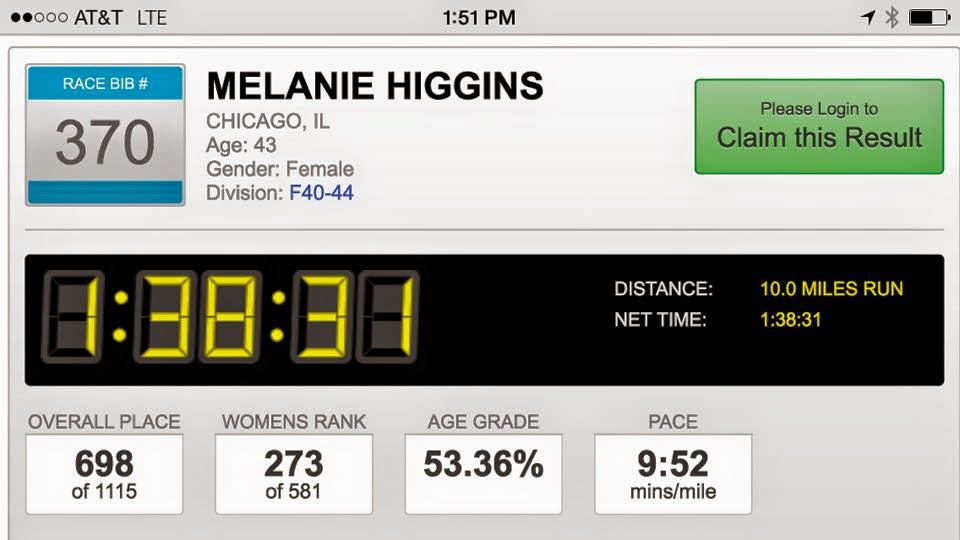 I was pretty surprised we managed to chat throughout the race. For once, I was that person who seemed to be barely expending energy while running and actually able to keep up a conversation. We were actually the people who were passing people the last couple of miles (that's some real motivation I tell ya) Of course, this being Chicago, when we turned around we were running into the wind. I worried this would be the end of my 10-minute pace since the gusts were pretty strong, but Jen and I pushed through and we managed to negative split the last couple of miles. I had never felt so good and positive at the end of a race. I even had enough left in me to sprint to the finish. Finishing time: 1:38:3, pace 9:51, 29/82 in my age group (ever the show-off, sister finished 14th in our age group!).

I now feel fairly confident that I can run a 10-min pace (2:11) half marathon. If I do that, that's another 5 minutes off my PR. Of course, I don't want to get too hopeful, you never know what's going to happen, and I've never run in Kenosha before, so who knows what that course is like.

Of course, this race course was a complete known. The path was a little crowded in spots with all the extra runners, but honestly it wasn't as bad as I thought it would be. I had thought doing 10 miles on the path was going to be a little annoying. I mean I run that all the time. But maybe that's precisely why it was so much fun. I didn't have to concentrate on the course so much as just going out for a Saturday run.

Next up, the Ravenswood 5k.

UPDATE: Apparently two guys tried to weasel their way into my age group, so even though I didn't go any faster, I did move up two spots in the ranking. Also, I may have had the best ever race photo of me taken while running up Cricket Hill: http://endurancephoto.smugmug.com/Races/Live-Grit-Lakefront10-Miler-41/i-L4S5LHW/A

Congrats on holding your goal pace and doing it while having a conversation! Maybe I'll see you at the Ravenswood Run!