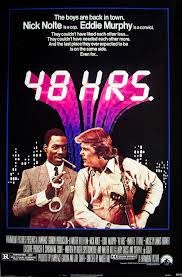 So this challenge I have set myself is seeming pretty stupid. I mean who cares if I've seen a bunch of movies from the 80s or not. The only reason I started this whole thing is because one of my friends had actually seen more than me and I couldn't imagine how that could be since all I did through the 80s and 90s was watch movies.

But there are certain that don't need to be seen. And frankly, there are certain movies that shouldn't be streaming on Netflix or Amazon Prime or available on DVD, and if they are, they should have warnings at the beginning similar to the Warner Brothers / Looney Toons statement about how this movie is a product of its time but is totally racist but we shouldn't pretend it doesn't exist. So I guess that means I probably should watch this from a historical/cultural perspective, because I have a hard time imagining who in their right mind would think that some of the jokes in this movie were funny, much less OK. Though apparently Nolte thinks this movie actually taught blacks and whites how to talk to each other.

48 Hours was, according to IMDb, Eddie Murphy's first movie, and you know, it was only 1982, so I guess that's why the full on racist "jokes" were acceptable. Of course at the end, Nick Nolte's character "apologies" for his racism and the world's a happy place. I guess if the racism had been tongue and cheek or ironic (like Eddie Murphy's Alfalfa character later on SNL) then it would have been funny. But it wasn't pointing to some long ago character that pointed how stupid we were back then that people thought this stuff was acceptable at all. No, it is (I hope) and example of not that long ago we thought these jokes were in any way acceptable and it's really too bad a black actor even had to take a part so demeaning to get his career started. But what do I know, maybe Eddie Murphy really did think the jokes were funny.

The only other thing that struck me about this movie was Eddie' laugh. So pretty much everyone knows his iconic laugh. Well that's not the laugh he had during the movie - at least not until the very end. I couldn't tell if he was trying out different laughs, or if the director hated his real laugh (or at least I assume that's his real laugh - maybe it's his totally put on) and kept telling him to laugh differently but then gave up. Whatever, clearly he went with the one that makes it into Beverly Hills Cop and that's the one we all know and love.

I can't wait to see what amazingly dumb shit I have to put up with next on my quest to watch these 80s movies. I'm sure I'll be surprised of all the stuff my 8-18 year old self missed during a decade I thought I knew.

Email ThisBlogThis!Share to TwitterShare to FacebookShare to Pinterest
Labels: movies