Runnin' in the Rain - aka Marathon Training Week Five 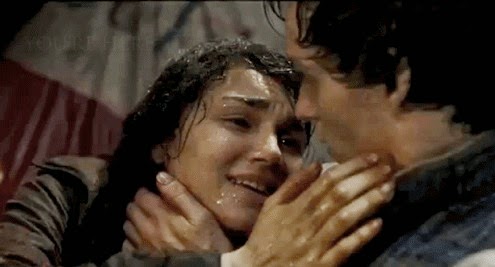 A little fall of rain / can hardly hurt me now...


OK, so the Saturday morning run wasn't quite as dire as Eponine's situation, but the thought of slogging out 10 miles in pouring rain didn't sound too enticing. But let me back up this tale of woe a bit.

First, I had the pleasure of searching for a babysitter who wants to come over at 5:30 a.m. Apparently this is not a desirable time to get up, even if the baby four-year-old you are sitting won't (most likely) be up for another hour and a half. So I spent the last week texting and calling pretty much anyone and everyone who I thought could use some extra cash. Eventually I found a couple of people ready to contribute to the sacrifice the running gods demand.

Second, when I put my running watch on Saturday morning it seemed to have some issues. Namely, it is dead. And not dead as in not charged, but dead as in the display is burned out and even though the buttons still make a beeping sound I can't see anything on the display and of course it's out of warranty so now I don't have a running watch dead.

Third, it was raining. Well, technically it didn't start raining until we started running, literally - and I mean that. It wasn't raining while we were waiting around to go run, we all line up to leave and then we start running and then it starts raining.

But, just as Eponine knows the flowers will grow, there was some good from all of this. First, I did find a couple of babysitters and, as we are always looking for sitters even when it's not 5:30 a.m., it's good to have some who know us and are available. Second, I have been contemplating switching from a Nike+ watch to a Garmin watch - now I can. Third, it didn't really rain all that much and it was nice and cool on the run and 10 miles seemed to go by pretty quick.

On the fundraising front, my raffle for a monster has motivated five donations, and I've raised another $100 (thanks to Jenny, Amy, Andrew, Yaz and Ali). Those are pretty good odds. So, if you want to get in on this month's raffle for a one of a kind, knit expressly for you monster, donate today: Click here to donate.


Stats for the week: