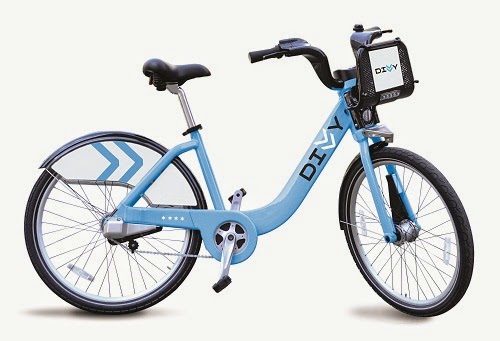 Last time I trained for the marathon, I had a hard time finding time to complete my longer mid-week run. I would try to do them on the treadmill at work, but once they got up over 5 miles, I was spending too much time away from my desk (not that I cared - but other people might have). I tried getting up early to do them in the morning, but that too became difficult as the miles increased.

This time around I started thinking of other ways ways to get the runs in. Mr. H. has run home a lot - the direct route being slightly over 6 miles. But the direct route is not very shady, along heavily travelled roads and generally sucks. It would be so much nicer going along the lakefront path. So I figured I could run along the path and then take the bus or train. But then a friend suggested I take a Divvy the rest of the way and an idea was born.

I mapped out where I'd end up for each week's distance and then found the nearest Divvy station. Serendipitously, there seems to be one within a couple of blocks every time. So that's what I did today - my first 5 mile mid week run. I "ran" from work to the lake and then up the lake to Fullerton where I hopped on a Divvy and rode home, docking the bike at the station a couple of blocks from my house. I say I "ran" from my office to the lake because I happen to work in the west loop, so running through the loop at rush hour, during Taste of Chicago no less, was a lot of walking and going slow to get around people. Added to that, stopping and starting my watch while I waited at stop lights meant that once again I forgot to start it and so lost some mileage.

Once I got to Fullerton, getting the Divvy was easy. An added bonus, I get a little cross training in. As we all know, the path is crazy and Wednesday's directly after work is no different. While I'm comfortable riding a bike, I hate riding when you have to dodge people and worry about speed demon bikers who won't slow down for anything. So, I took it slow and stayed to the right. Once off the path, it's pretty much a straight shot to my house on side streets that have bike lanes. It may have actually taken me more than half an hour to get from Fullerton to my home. I'll have to check to see if I incurred an overage charge.

So my take aways from this experience:
In other news, I've only had a couple of donations this month. Remember all donations during the month of July are eligible for a one-of-a-kind knitted monster.