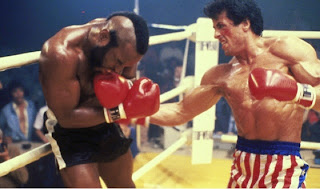 I've crossed off the second movie on the Iconic 80s movies according to Buzzfeed that I hadn't yet seen - Rocky III. The first thing I said to Mr. H. upon completion was something along the lines of "well, there was a reason I didn't see that when it came out" So yeah, not my favorite movie. It was a typical Rocky flick - he loses a fight, someone gives a heartwarming/rousing speech, he trains for a fight, there's a montage, he's ready for the fight, he wins the fight. Mr. T. was fun, so at least there was that.
On to the next movie!

Email ThisBlogThis!Share to TwitterShare to FacebookShare to Pinterest
Labels: movies