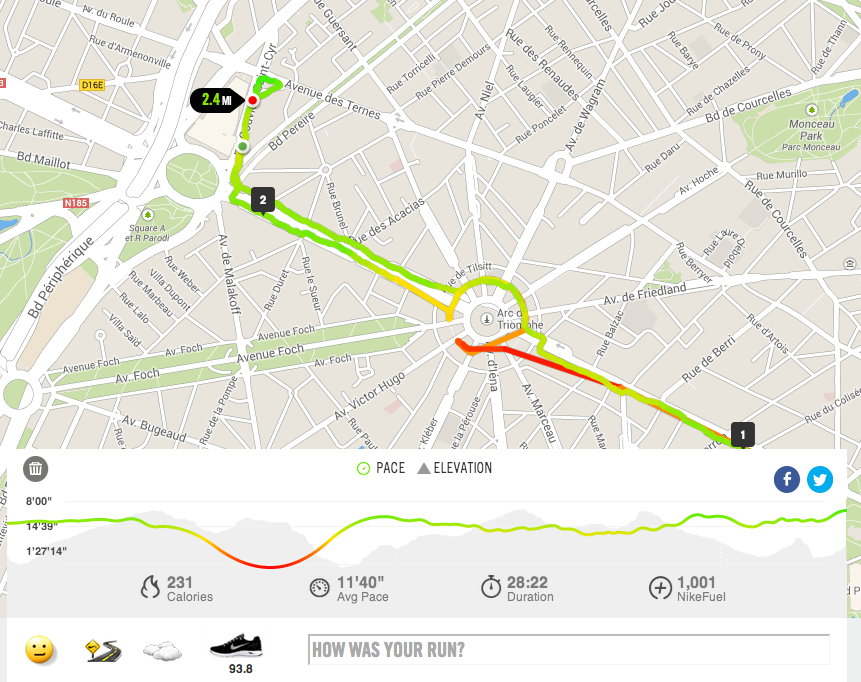 On Monday, I had an all-day work  conference that ended with a dinner that went until about 11 p.m. Then at midnight, I made the decision to watch the US Ghana match at the James Joyce Pub, conveniently located just down the street from my hotel. So I didn't make it out of bed early enough for my Tuesday morning run.

However, even though I was again up until 2 a.m. the next night, since I didn't have to get up too early, I did run this morning. As my hotel was just off the Champs-Elysees, I decided to run up and back along it to ensure I wouldn't get lost. However, even though it would seem like an easy thing to go around the Arc de Triomphe, after crossing a bunch of streets, you kinda losing your bearings a bit. As you can tell from the map I almost went all the way around before realizing I had actually missed the the other side of the Champs-Elysees (I have no idea how drivers make it around that traffic circle). Since I kept pausing my watch when I would get stopped for a light, I forgot to restart it at one point so I lost some distance. Also, the Arc is sits on the top of a hill, which isn't that bad when you walk it, but is more noticeable when you're running.

But it was a great run and now I can say I ran in Paris!

This website was… how do you say it's Relevant!!