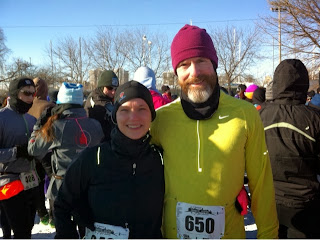 So my last two weeks of running haven't been great. I kinda lost some momentum and I really got tired of running in the cold and snow. I didn't do my last long run and only ran once during the week. In my head I kinda gave up and vowed just to go out and run whatever, even if it was the slowest half marathon on Earth.

Not helping the situation, the polar vortex is bearing down on Chicago again and ironically, the 10 a.m. start time was hurting not helping as today's high of 25 was reached around 3 a.m. and then the temp started falling. It was projected to be about 15 degrees at race time - not too bad as I've run in colder temps. However, that pesky wind has been blowing a lot lately, and the wind chill was a cool -5. Not ideal. And frankly, for someone not accustomed and prepared for this weather, probably dangerous. I mean, it was probably dangerous for all of us there really today. But hey, we've trained all winter for this, why stop now.

So the coldest Saturday we've had (with wind chill), but luckily with the sun shining down on us, I started out just to get through the run. The path, while not perfect, was pretty good given that we've continued to get an inch or two of snow each of the last several days. And then of course, even when the path was cleared, the wind blew more snow on it. Then there were parts of the path that weren't "path" and we ran through mud. We basically had every type of condition on the path we possibly could. Luckily, very few ice spots, it's the small things really.

After a quick trip North from Montrose, we turned South and lo and behold the wind stopped. With the sun on my face, I actually had moments of thinking that it wasn't too bad at all. Of course, the wind hadn't really stopped it just wasn't blowing in my face. Once we turned around, it was back and brutal. Now my thoughts went back and forth between "wow, I am badass for doing this" to "what the f was I thinking". At one point I actually felt like I might cry.

And through all of this, I kept having to restart my music because, I assume due to the cold, it would decide to stop playing every few miles. The last mile we turned back South and I had my fastest mile due to a combination of just wanting to get it over with and thankful the wind wasn't blowing in my face anymore.

So, how did I do? I finished in 2:21:24, 10:48 pace. Considering the conditions, I am totally happy with this. And it's a PR for my half. I knew barring something catastrophic, it would most likely be. I finished my first half in 2:42:13. I'm wary of saying I expect to PR again in Fort Worth in four weeks at the Cowtown Half...I'm just hoping there is no snow and wind and it's warmer than 15 degrees.

I've now run two F3 events, and I think they're great. Though the path conditions could have been better, they really couldn't have been, and they had such great communication on Facebook and email about what to expect. Support on the race was great too. I like the small feel of their races, but I suspect they may go through some growing pains as their races become more popular. The shirt and medal are awesome and the after party at Cubby Bear was a lot of fun. Usually I just go home after races, but it was fun to see people, meet up with my group leader from my training group (thanks Sarah) and really, it's only after running 13.1 miles that I enjoy beer.

Even though it was brutal out there. I'll probably do this again next year because it's such a great way to maintain training over the winter.