I started a 5k speed program which may or may not be helping much (more on that later), that culminates in a 5k race in October. I'm going to do the Pumpkins in the Park on October 26. The training calls for a race mid way through the schedule, and the Rosehill Cemetery Crypt 5k seems like a good one because it fits the schedule, it's close to home, it's at night in the dark in a cemetery. What could be more fun?

Mr. H. and I decide that it's easiest to just ride our bikes up there. And yep, straight up Damen, over to Ravenswood and we're there. The run is in its second year and had a few hiccups last year as I heard from others who had run the race - it started late and the course wasn't as well lit as it could have been. They seemed to fix those things this year, but, if you're listening Special Events Management, bike parking would have been great. You could have easily set up a couple of bike racks under the Metra tracks and we would have been golden. But no worry, a handy street sign provided our bikes the security we needed. 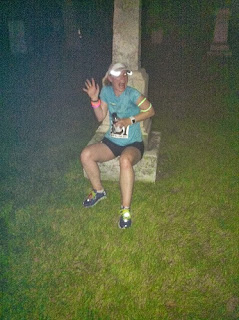 Since I read the reviews of the run from last year, and could tell that there would be a lot of walkers, Mr. H. and I set up ourselves near the start, outfitted ourselves with glow bracelets and necklaces and a headlamp for me (Mr. H's didn't work) and waited for the start. As I said, it started right on time with little fan fair, which was fine with me, and the course was very well marked with cute little tea lights. It was easy for me not to lose my way as all I had to do was follow the stream of people running in front of me since pretty much everyone had something on that glowed. I guess if you were out front you had a bit harder time as Mr. H. said he and another runner almost took a wrong turn. But other than that, it was a lot of fun running a different, very twisty turny path in the dark (through a cemetery). 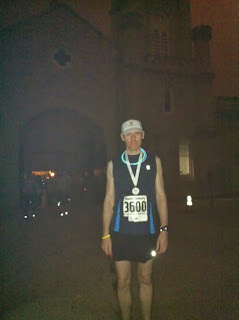 Unfortunately, I went out a little too fast and so slowed way down my second and third miles. And here's where my speed training may or may not be helping. According to my watch I finished in 31:14 running an average 9'48" pace. Not too bad, not as fast as I wanted to go, but OK. However, the official results have me finishing at at 34 minutes/11'04" pace . So either my watch is way wrong or something went wrong with the chip. I've emailed to see if anyone else reported problems with the timing.

But, the good news, at least for Mr. H., is that despite feeling like he is actually the slowest thing on two legs, and his almost wrong turn, he finished in 8th place overall, 1st in his age group.

Update: I emailed ChronoTrack and they sent me a link with what was a more accurate result. My time is officially 31:10; 10'02" pace. Again, not as fast as I wanted to go, but much closer to what my watch said. Thanks to ChronoTrack for getting back to me so quickly.

Sounds like a fun time and just up the street from me. Glad to hear they lit the course a little better this year. I need to do this when I'm not in marathon training mode!

Awesome post.Thanks For share this post with us. For some it was created as technique of respect to a selected one who has finished nice favor to the maker.Others additionally bike bracelet imagine that it needs to be made out of particular threads and colours for variousfunctions.Additionally it is believed that these bracelets grant a persons'

Really useful information. Thanks for sharing that with us. It gives so many great ideas.
Event Management in Pondicherry