Before I even started this race, I told myself this was the last time I was going to run it. This year was the fourth time I've participated in this race, three times with my current company and once with my previous company. And the years I haven't run I've been on the planning committee and attended the race with the exception of the year my son was born who's birthday, happens to be today. With more than 25,000 people participating, it's a crowded field. But in the years since I started running this, they've made a lot of improvements.

The first year I ran I think you self reported your time and it was supposed to be based off of the official clock. Then they started actually chipping the run. The last couple of years they have started the run in waves, which makes sense with this many people. But this year there didn't seem to be any rhyme or reason for what wave you were placed in. When you register they ask for your projected finishing time. I put a solid 10 min pace, so 35 minutes - for some reason this isn't a 5k, it's a five and half mile run. I know I can run faster than that, but figured I'd give myself a little leeway. I finished in 35:55, and I would have easily finished under 35 minutes had I not spent the first two miles running around all the walkers.

I know it's hard to make people line up to where they are seeded. But I also passed many people who were walking that started in the waves before me. And with that many people, it's just too hard to actually race when you're weaving around people for the entire race. 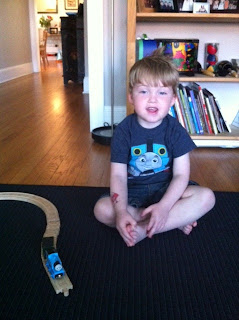 My mood also wasn't helped by the weather - cold and windy. A change in the course route this year had us under lower Columbus and Wacker for a good portion of the run, so that was actually pretty nice. However, had it been warm, might have made it hotter.

In the end, it was just another weekday run. The t-shirts this year were technical shirts, so I actually took one. It's always amazing how many Corporate Challenge shirts from previous years you can find at a Salvation Army at any given time.

In other news, as I mentioned, it is Baby H's third birthday today. I can't believe it has been three years already. It seems like yesterday that he was just tiny. Actually, it doesn't. It has been an amazing and wonderful three years, and I am looking forward to more and more wonderful days ahead.

I was so excited to have a comment - but I've removed it since it was just spam. But now I know how to get me some Louis Vuitton bags :)