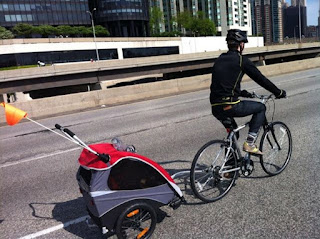 Having just purchased a shiny new bike for mother's day, and at the urging of my sister who had signed up for Bike the Drive, I decided that a wonderful family event would be to get out of bed, plop ourselves on our bikes after stuffing Baby H. in the bike trailer and then head on down to Lake Shore Drive and pretend how great it would be to commute to work on a bike if there were no cars on the road.

Well, Baby H. didn't want to go at first, it wasn't as warm as a Memorial Day should be and my sister partied just a little too hard the previous night. Also, as I was the one pulling Baby H. in the trailer and I knew I wouldn't be going that fast anyway, I used the old bike instead of the new one. But, even with all that, it really was a great ride.

We got on going south at Montrose and headed down to  Madison. At that point we traded text's with some friends who had already ridden south to southern most point of the ride, the Museum of Science and Industry. They were heading back our way and since they were a bit speedier than us, I knew they'd catch up with us.

So we moved the trailer to Mr. H's bike so he could see what it was like to lug around an extra 50 pounds and headed back north. Our friends caught up to us around Montrose. We headed up to the turn around at Bryn Mawr and then we rode back to Montrose. In all it was a great drive. The forecast rain stayed away and it was actually sunny. Baby H. loved the trailer and we all loved the image of nothing but bikes on Lake Shore Drive.