There is no such thing as too much Star Wars 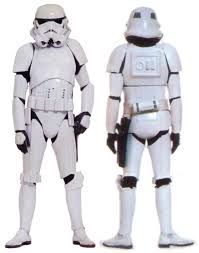 Last night Mr. H. and I were lying in bed watching a bit of Star Wars (A New Hope natch) before going to sleep. We do this pretty much every night, watch a 15 - 20 minutes of a movie before going to sleep. It's how we unwind, end the day. We rotate through our favorite movies, sometimes putting a new one into the mix. SW is of course a perennial favorite. A fall back when nothing else works.

Anyway, we've both seen Star Wars too many times to count. And you know when you've seen something so many times that you think there can't possibly be any other thing that you could notice? Well something happens then and you start to look at it in a whole new light. This happened to us last night. We're lying there watching Star Wars and we're at the part where the boys are rescuing Princess Leia from the Death Star. And so I'm asking questions about what all goes into the stormtroopers outfit/costume/gear - oh, it's called armor? It looks plastic, but whatever.

I mean, first there's that box on the back with the circle and bars. What's that about? Mr. H. said it was probably their cooling/heating system. Like those things have built in temperature control or something. So I say, but they're molded plastic. No, apparently that's the shape of the components underneath. Oh whatever. Then I notice that round tube that's on the back of the belt. It's like a little round fanny pack. What the hell is that? Snacks (when you have a toddler, snacks are a constant thought) and spare change. We decide it's the Empire's version of a fanny pack.

Later, after Luke and Han have changed back into their regular clothes, I notice (seemingly for the first time) that they are both still wearing the belts from the stormtrooper armor. How I never noticed this I do not know. I always thought that grappling hook was on Luke's belt. What on Tatooine does a stormtrooper need with a grappling hook? And can you imagine the conversation Luke and Han had when deciding to keep the belt (but not the fanny pack). Luke was all: But look, there's a grappling hook. And Han was all: What on Alderaan are you going to use that for? And Chewie was all: You gonna eat those snacks?

And seriously, how stupid are those stormtroopers. It seemed (and I realize we didn't know this when we all first saw Star Wars - but we do now, so we can't ignore it) that those Kaminoans (btw - this is a word I can not pronounce when reading, but my almost 3 year old can) were teaching the clones how to shoot and fight and think and what not. They may not have been the brightest bulbs, but seriously "The door's locked. Move on to the next one?" You can't just blast open a door to make sure that the droids you are looking for are behind it? And later, when yet once again, the droids you are looking for come up with a lame ass excuse to get away ("All this excitement has overrun the circuits of my counterpart here. If you don't mind, I'd like to take him down to maintenance.), sure just let them go. No we're not looking for a tall gold droid and a little blue R2 unit right? Nope, these aren't the droids we're looking for.

Clearly after the Clone Wars, just any ole body could sign up to be a stormtrooper as long as you met the height requirement.

As we were laying in bed laughing, I remembered a French teacher I had in high school (if I asked my sister she'd remember her name, but I'm too lazy). She asked one day what everyone's favorite movie was. I said, of course, Star Wars. She laughed. She made me feel ashamed that I would say something as uncultured as Star Wars was my favorite movie. For years after that, I said Citizen Kane was my favorite movie. I did, and do, actually like that movie. And I knew that was an appropriate response to the what's your favorite movie question. Well, at least with a certain type of crowd. But as much as I like Citizen Kane, Mr. H. and I never pick it to be our going to bed movie (though we do own it). We need something that feels comfortable, like a warm blanket and the arms of your mate, to unwind our day and send us off to sleep. Even if we've seen it so many times instead of actually watching it we're deconstructing it and laughing.
---
Note  - I realize if I Google I could probably find out what those little round things on stormtrooper's belts are supposed to be and that their armor is some space aged carbon fiber or what not. But whatever, that's no where near as fun as just making shit up. I still don't understand why they can't hit anything with their blasters.