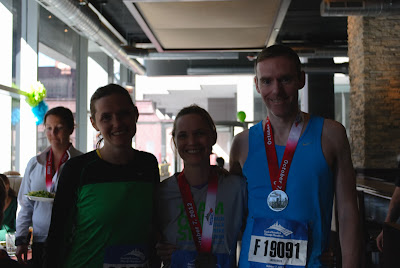 Of course, this may or may not be similar to anyone else's marathon experience. As they say, your mileage may vary - but not much more than 26.2.

The beginning of the day started out early, around 5:30. We had done as much as possible the night before, so all we needed to do was get dressed and head on out the door. As I suspected it would be, the train ride was surreal as everyone else on the train was headed downtown for the exact same reason. After dropping our stuff off at South Branch where the Team One Step pre-race gathering and after party was held, we headed to the start line. I suspect downtown is pretty barren at 6:45 a.m. Sunday mornings. Marathon day is no different except runners and the wonderful volunteers already starting to set up aid stations. After a quick port-a-potty stop, we head to our corral and wait around nervously with all the other runners. During this time you do things like jump up and down to keep warm, contemplate taking off your extra outer layer of clothing but then decide to wait until the last minute and think about the possibility of just hopping in a cab and going home.

Fun fact: In cooler temperature races, runners will often shed an outer layer of clothing right before or along the race course, which then gets donated. It's fun to see all the shirts, gloves and what not fly overhead. What's probably not fun is getting hit by a fleece because Mr. H. didn't quite make it to the sidelines. Again, anonymous runner who my fleece landed on, we're sorry.

I won't take you through a mile by mile breakdown of the race because that would take too long and probably be boring. But here are some quick thoughts on different things: 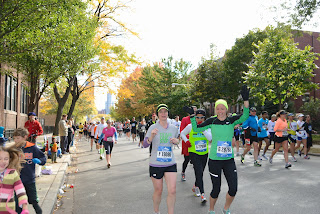 In the end, I didn't go as fast as I wanted to go. My official time was 5:23:05. My watch time was closer to 5:11, because it doesn't include the two stops I made. I hit the proverbial wall somewhere between mile 20 and 21. I didn't necessarily want to stop totally, I just knew that I didn't have much more in me to continue to "race" anymore. Luckily I had my sister with me to help me push through.

And now the question, am I going to do this again? Amazingly, I am not that sore. I pretty much went to sleep right after we got home and rested most of the next day. But we did get up and around and by the end of the day yesterday, I was amazed at how good I felt. Part of me thinks that's because I didn't push myself as hard as I could but I also think it's because I trained and was in a good place for the run. I do know I could go faster. Nothing crazy, but I'm pretty sure I could reach my goal time of somewhere between 4:45-5 hours. Does that mean I want to try and do that? Maybe, but not anytime soon. Right now, I'm just happy to be done and to have a really good excuse for NOT going for a run.

So proud of you Melly Mel! I can't even imagine.

So awesome, Melanie! Your times are about the same ad mine were. Just relish the fact you finished!! Way to go!!