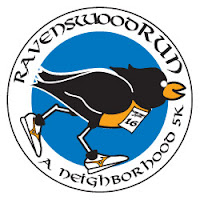 I didn't have a stellar training week last week. I skipped two runs due to work/Ikea/laziness.  But I did manage to get out and participate in another race - the Ravenswood 5k.

It was a pretty good day for running. Sunny, not too warm, but not too cold either. Since the neighborhood race is just one neighborhood over, Mr. H. and I jogged to the start and picked up our packets. It was a nice warm up and, even though it really seems like a waste of energy to go for a jog before you go for a jog, it does actually get me warmed up. This apparently helps me run faster quicker. Very counter intuitive to me.

I met up with my friend Sara and we started the race together. We hung together through the first and second mile, but right around the third mile we lost each other. I thought that I had passed her, but just as I started my sprint to the finish line, I heard her name being called as one of the finishers. So not only did she beat me (again) she was one of the lucky ones that got her named called out. But, unlike last year when I finished about three minutes behind her, this year I was only about 30 seconds behind her. We both actually got faster this year. In fact, I did another PR with this race - 28:43 (a 9:15 pace).

I did my first outside run since last week's race. I typically train on the treadmill. I like the precision in speed the treadmill gives me. I also like that I don't have to stop for traffic or watch out for broken pieces of sidewalk or maneuver around people on the treadmill.

Today I did 5 miles with Mr. H. He runs quite a bit faster than me, so it was nice of him to slow down and stay with me for the whole five miles. My overall time was actually pretty good, about 48 min. I only ran over one child and didn't fall into any potholes. It was a little windy and cold, another thing I don't have to worry about on my indoor runs. But it was good to get outside and running with Mr. H. always makes me go a bit faster.

On Saturday, Mr. H, my sister and her boyfriend and I traveled to Kent, Ohio (my and Mr. H's Alma mater), and ran the 2nd Annual Black Squirrel 5k.

This was, in my mind anyway, the kick off event in my training for the 2012 Chicago Marathon (for which I am raising funds for the Team One Step). Also, this was to be my first attempt at actually placing in my age group and getting a medal. Because this is only the second year this race was held, and because it's in Kent, the field is pretty small. Last year there were a little over 500 participants. This year, there were exactly seven more people who ended up running. Them's pretty good odds. In preparation, I took a look at the three top 2011 finishers in the 40-44 age bracket for women. They all finished in around 27 minutes. That would mean I'd need to do an average of nine minute miles. Something not entirely out of the realm of possible, but something that would need several weeks of training.

Alas, that training didn't quite happen. I did manage to get on the treadmill at work and run a couple of days a week and I did some speed work, running a few miles at the nine min/mile pace. I actually felt pretty good, but I knew going into the race that I probably wasn't going to come close to a finishing time of 27 minutes.

And I was right. First of all, despite my not really remembering this, Kent's campus is pretty hilly. It's not that hilly when you're walking to class. Though now that I think of it, the building the JMC used to be in is on top of a hill that I had to go to pretty much every day. Not sure how I could forget that. Anyway, running up hills is hard. The good news is you usually get to go down some too, so that helps. In fact, my first mile was just over 9 mins (9:05). I totally didn't realize I was running that fast or how I was able to run that fast. Unfortunately, it didn't hold for the second mile (10:15) though I made up for it a little bit in the third mile (9:35). I ran the last 2/10ths of a mile pretty fast and uphill that once I crossed the finish line I thought I was going to throw up.

In the end, I ran a 29:33 with a 9:31 pace. My fastest 5k time and on a hilly course no less. I didn't place in my age group, but I came in 7th. Even if I had run my goal of 9 min miles, I maybe would have placed third, because the first and second winners ran 24's and the third place ran just over 27 min by a couple of seconds. Still, not a bad goal for my next 5k on a flat course (pretty happy Chicago is so flat!).