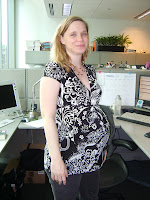 It's National Infertility Awareness week and this post was brought about by Stirrup Queens "what if" post.

I never thought much about infertility of course until it happened to me. And once it did happen to me, I was lucky enough to (a) work in a state that mandates infertility treatments to be covered by insurance and (b) work at a company that doesn't somehow get around those laws and provides quite extensive infertility treatment coverage.

The year-and-a -half-long journey of trying to conceive (after having tried the natural way for a year) could have cost me tens of thousands of dollars. The doctor's visits, tests, procedures, injections etc. could have drained my savings account in addition to taking a toll on my sanity. But I was one of the lucky ones. Not only, after five cycles of Clomid, two IUI's and three IVF cycles (each of which yielded only enough fertilized eggs for one transfer), was I lucky enough to finally conceive a child, but I did so by spending only about $5,000 in co-pays and uncovered tests. Not even enough to qualify for the health tax deduction from the IRS.

As it was, having done two unsuccessful IVF cycles involving daily shots, sometimes multiple shots a day, regular intra-vaginal ultrasounds and blood tests, all ending in a "procedure" to remove eggs and then fertilize them and hopefully another (less painful) procedure to put them back again, I was looking at the third time possibly being the last time. If it wasn't successful, I just wasn't sure I could go through the emotional roller coaster that I knew now would follow. How I could have made the decision to go on after having paid out of pocket for something like that, well, I probably would have given up after the first try.

If I didn't live in a time and place where Assisted Reproductive Technology wasn't available to me because I couldn't afford it, or because there were laws against it, or for any other numerous reasons...well, I probably wouldn't be expecting my baby any day now. My mother, father and mother-in-law, wouldn't know the joy of being grandparents to our child. My sister might never be an Aunt. I would have had to learn how to deal with not having a child of my own. Maybe I would have looked into adoption more seriously. Maybe I would have decided this was fates way of telling me that I was too old to have children, or that I wouldn't make a good mother. Maybe the depression that I worked so hard to get through years ago would come back and rear its ugly head.

There are so many maybes out there...that even as I enter my 39th week of pregnancy, and complain about not being able to sleep, about the heartburn and how I just want to have this baby already...I try (with Mr. H's help) to remember the times before this baby was pretty much a given. I remember the negative pregnancy tests and the tears. I remember the joy of the positive followed quickly by the dread and worry that something would go wrong. I feel the baby move inside me and I remember how lucky I am to live in a time and place that offered me choices and freedom to make those choices.

The links below have more information about infertility:

Email ThisBlogThis!Share to TwitterShare to FacebookShare to Pinterest
Labels: baby

Mr. Thompson and Me said...

A beautiful post which gives hope. Thanks for sharing.

wow, what a beautufil post and a question I think about often.
(Although our IVF and IUIs were not covered and we went into serious debt to have our sons. )

I always think about the fact that without things like IVF, my twins wouldn't be here...and what would my life be like then? Too sad to imagine.

it was a beautiful post, congratulations on your PG and hang in there just one more week...wishing all the blessings parenting can bring.