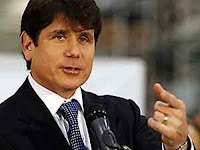 I know what you're thinking. You're thinking, I wonder what it would be like if I saw Governor, Rod Blagojevich running down the sidewalk. Well, I'll tell you, it's freaking hilarious. First of all, when first see the Governor running, you think, wow, that guy looks like Blago. Then, when you realize it is the ruler of the state of Illinois, you think, wow, Blago can't run at all. Then you think he's really sweating and huffing and puffing and barely moving his feet - it looks like he's about to have a heart attack. Then you think, I know I don't look wonderful when I run, but I look better than that.

To be fair, this could have been the end of his run. Maybe he had just run five miles. Though I live about two miles away from him, so if it was the end of his run, I don't know how he was getting back. I didn't see any security detail with him, but that doesn't mean they weren't there.

Anyway, it was a fun and funny thing to see on a Saturday afternoon as we made our way back from Target. I bought a curling iron and a hat and a pair of sweat pants and some new lip gloss. It was a good trip that ended even better.
2 comments:

Email ThisBlogThis!Share to TwitterShare to FacebookShare to Pinterest
Labels: politics

Mr. H. and I packed an emergency bag in case we had to get out of the country quickly after the election. So the good news, in addition to Obama winning the election, is that we're staying put for the time being. The bad news is that no matter how happy I am that Obama won the election, I still am still annoyed with one of my coworkers. I guess even on a day with seismic shifts, somethings must remain the same.
5 comments:

Now this is a poll I can trust: www.7-election.com/
No comments:

Email ThisBlogThis!Share to TwitterShare to FacebookShare to Pinterest
Labels: politics

I thought I'd take this time to ponder the last eight years and wonder how we will ever move beyond it. Good thing I found this book on Amazon: The 12-Step Bush Recovery Program. I'm on step two "Understanding What You've Been Through." I'm really hoping to get to step 12 by January 20. Keep your fingers crossed for me.

I've also added this book to my bedtime ritual: Goodnight Bush. It helps me sleep to think that tonight might be the last time I have to say goodnight to him and tomorrow I'll wake up and it will have all been a bad dream.
No comments: