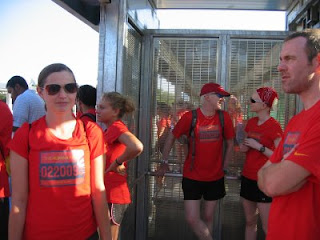 Yesterday, Johnpaul, Jackie and I ran the Nike Human Race 10k. The race was held in more than 20 cities around the world. I'm not sure exactly how many people did the race worldwide, I heard a million, and I think about 16,000 ran it in Chicago. I finished in 108,636 place in the world, 5,921 in Chicago, and in 2,626 place out of the Chicago women with a time of 1:03:15. Not my best 10k time, but not too bad considering how many people were running.

It was fun getting there, because pretty much once we left our apartment to walk to the train we saw people wearing the run t-shirts. The shirts, as you can see from Jackie's, also had our bib number on them - so everyone was wearing them. It was cool to see all the people on the train heading toward Soldier Field for the race. However, it was near impossible to keep track of Jackie as I ran and we eventually lost each other around mile 3. For this reason only she finished two minutes in front of me.